Let’s speculate about a #ProRelForUSA timeline

25 Jul, 2017 Chris Kessell Comments Off on Let’s speculate about a #ProRelForUSA timeline 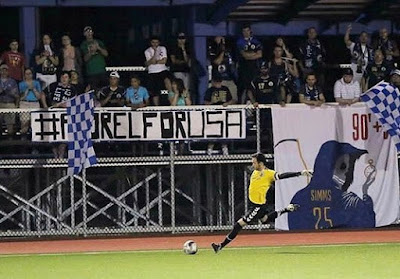 Since yesterdays $4B media rights offer from MP and Silva discussions about opening the American pyramid have been happening like never before. As can be expected with such a hot topic, sources are starting to leak more information about the deal.

As Bob Williams explains in this series of tweets…

Some notes about the $4bn pro-rel offer to MLS, per a highly-placed source.

1) The offer has been fronted by MP & Silva but has the support of investors, financiers and broadcasters.

2) TV broadcasters of today – and notably of tomorrow – are driving this deal in the search for commercial opportunities.

3) It has been somewhat lost that the offer was not just for MLS TV rights – but also for D1, D2, D3 initially and US Open Cup.

He goes on to explain that of the $4B over 10 years he is being told that $80m per year could make its way to lower division teams and the inclusion of solidarity and parachute payments would be included in this new way to structure the American pyramid.

His sources are also saying that the offer was most assuredly serious and that this offer is just the beginning of a path to an open pyramid not the final offer. One of the most intriguing pieces of these leaks to Mr. Williams is that teams from up and down the current pyramid are already showing interest in finding out more.

This was obviously a play by Ricardo Silva to make the best case scenario happen. Unite the entire pyramid under one umbrella, MLS included. This would also be the end of Co-D2 and the future Co-D3 sanctioned leagues during this creation of one unified pyramid. This bid was dismissed out of hand by MLS.
So what possibly is next?

Before we get to that, let’s think back to everything that has already happened.

1. NPSL begins public discussions of creating a full season league.
2. Deloitte Study is released supporting #ProRelForUSA as the best path forward.
3. USASA (and a USSF Board member) publicly announce they are working on a structured D4/5/6 system.
4. Co-D1 sanctioning is confirmed as a possibility via Co-D2/USSF conversations by NASL
5. NISA league is created.
6. Peter Wilt announces publicly that NISA wants to be a part of a NPSL > NISA > NASL pyramid.
7. MP and Silva make $4B bid for media rights to a fully restructured American pyramid.
Thats where we are today. So now lets do the fun part and speculate about the future for a minute…
8. NISA releases teams for it’s inaugural season.
9. USASA releases D4/5/6 standards and multiple state associations create D5/6 state leagues.
10. USSF funded DoublePASS development system audit is released that supports claims that an Open Pyramid will help immensely with player development long term. This would be another huge public relations win for the open pyramid movement.
11. Alternate D1/2/3/4/5/6 pyramid is officially mentioned by stakeholders.
12. NASL, NISA, USASA, and USSF begin official work and hammer out the details for a new D6 > D1 open pyramid structure.
13. A plethora of USL and PDL club owners express interest in participating in new structure.
14. MP and Silva offers media rights deal to new Alternate Open US Pyramid and US Open Cup.
15. Media rights offer is extended to USSF to include USMNT, USWNT and USYNT media rights when their current deal with SUM expires as well.

An infusion of cash (even one not as large as the $4B offered to a pyramid that includes MLS) like what is possible in this scenario radically changes soccer in this country.

A question that needs answered right now is have we gotten through these first 7 steps randomly or is there discussions by many of the stakeholders trying to create this alternate pyramid?

I don’t know for sure… but it sure seems that with some collaboration these next 8 can happen and happen much more quickly than many assume.

I would love to hear your opinion on this speculation in the comments or on social media. Make sure you continue to tag all of your open pyramid conversations with the #ProRelForUSA hashtag on all your social media platforms (yesterday was a HUGE day on Twitter for its use by the way!!!).