Say one thing… do another

This past October MLS commissioner Don Garber called an impromptu press conference to complain about US Men’s National Team coach and USSF Technical Director Jurgen Klinsmann saying top US players should explore all options on where to continue their careers, including Europe.

“Sending a negative message to any player — and obviously to U.S. players — that signing with MLS isn’t going to be good for their career or good for their form is incredibly detrimental to MLS,” the commissioner said.

One would expect Don Garber, as a league commissioner so intertwined with the USMNT via his USSF affiliation (being a board member) to back up this big talk and bravado by signing the brightest young players in the country.

FOR ALL OF THE TALK in the upper echelons of American soccer about getting the best amateur players in the United States into pro soccer, this winter there seems little inclination from Major League Soccer to put its money where its mouth is and actually sign the top amateur talent.

As a result, the league is having tremendous difficulty signing many of the top players in college soccer, including Stanford sophomore Jordan Morris, who last month became the first college player in two decades to be capped by the U.S. national team.

Many of the top prospects in the country including current USMNT member Jordan Morris as mentioned above, have been low balled on their initial MLS contract by dollar figures in the range of $40-50,000 each according to THIS ARTICLE ON AMERICASOCCERNOW.COM.

When you mix these actions with the reports that MLS picked up $750,000 dollars of the 18 month contract of Liverpool star Steven Gerrard (READ MORE HERE) even though MLS rules expressly state that each club signing a Designated Player much pick up the salary above the salary cap charge. 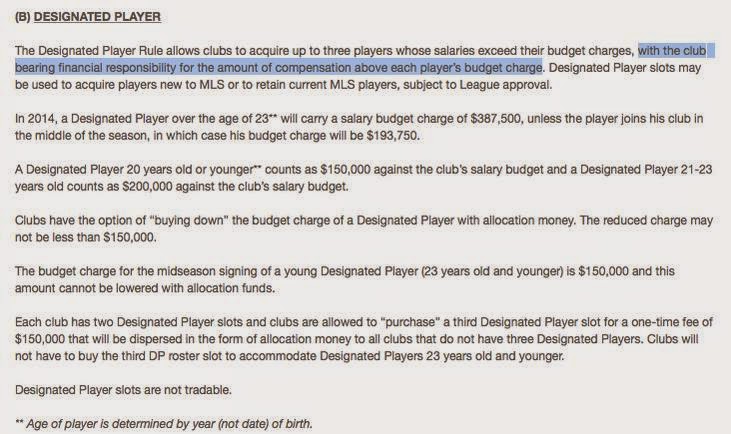 It becomes hard to see how MLS and by extension Garber, are actually committed to developing the brightest young players in the nation in our currently closed system. The MLS paid $750,000 over the next 18 months would have covered the necessary extra $50,000 a year for the three years of contract for five of these top young players to join the league.

Even according to Duane Rollins of CanadianSoccerNews.com

Talked to a few people over past few days. The reports of MLS teams being pissed at league for being cheap w/ GA class aren’t exaggerated.
— Duane Rollins (@24thminute) January 4, 2015

Did MLS sacrifice this years crop of potential stars just to hurry up and sign Steven Gerrard to cover up the debacle that was the Frank Lampard “signing and loan”?

It would appear that the league is picking up $750k of a contract no one franchise in the league was prepared to meet the requirements of. It also appears that several teams are ready to meet the contract requirements of these young players but are not being allowed to do so. Is this what we want from our top nations top league… a league more concerned with PR moves than creating an environment that allows the US to have the best league it can possibly have?

Also as fans of the USMNT should we not want the USSF designated league structure that is going to allow us to have the best young players and the best development situations possible? An open pyramid featuring promotion and relegation as has been DISCUSSED HERE can deliver that for us. Please join the discussion in the comments on Twitter using the #ProRelForUSA hashtag!