Worries about USSF Conflict of Interest issues are not new.

Recently Stefen Szymanski and Roger Pielki Jr released a wonderful article about the Conflict Of Interest issues within USSF and the lack of external oversight on these potential conflicts. 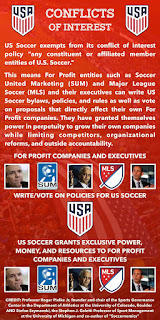 While this current crop of COI issues concerning many of the non-profit USSF board members and their potentially self serving relationship with their for profit business ventures MLS and its Soccer United Marketing (SUM) marketing arm are alarming… concerns over Conflicts of Interest from USSF leadership are not new at all.

During the initial creation of MLS the Chicago Tribune reported that many inside and outside of USSF were concerned about the inherit COI issue between USSF President Alan Rothenberg and his self described substantial financial stake as an investor in MLS.

It is easy to understand why voices and eyebrows were raised over the process by which the U.S. Soccer Federation gave preliminary approval for one of the three plans it reviewed to start a top-flight pro league in the United States.

After all, the USSF’s Board of Directors approved the plan submitted by its president, Los Angeles attorney Alan Rothenberg, likely to be an investor in the entity he calls Major League Professional Soccer, Inc.

The USSF also advanced Rothenberg a six-figure sum from the 1994 World Cup’s expected surplus to help him develop the plan. Rothenberg is chairman, president and chief executive officer of the World Cup organizing committee.

And several of the directors who voted 18-5 to approve Rothenberg’s plan are employed either by the USSF or World Cup ’94.

The apparent and potential conflicts of interest in that situation dismayed members of the two competing groups, both of whom figured the deal was done long before the board voted last Sunday in Chicago.

“We were shocked and disappointed by the decision,” said Bill De La Pena, president of the American Professional Soccer League, which wanted to move up from its minor-league status.

“People beholden to Alan were central to the decision,” said Chicago businessman Jim Paglia, who wants to establish his League 1 America as part of a real estate development plan.

Another item that can easily be seen as a blatant lack of good governance caused by a COI is the fact that the USSF approved spending a very large chunk of money to support MLS’s creation and did not receive an ownership stake in the league.

Looking back at these issues with the clarity that the lens of these current COI issues gives us we can see that these types of issue have been long standing and quite worrisome to many.

Another item that time has made apparent is that USSF leadership has not always picked wisely when it comes to allies. Sunil Gulati and USSF’s relationship with Chuck Blazer has been documented quite well and with his fall from grace that relationship has come under some scrutiny.

Pairing Alan Rothenberg and his obvious USSF/MLS COI issues with what we now know about disgraced former FIFA President Joao Havelange and their relationship along the power play FIFA made to keep Rothenberg in power…we now have two USSF Presidents who have made very poor choices in who to align with.

Despite the success of the World Cup, which he helped organize, Rothenberg has been a controversial figure within the USSF during his four-year team. His current difficulty centers on Rothenberg’s twin positions as president of the USSF and head of the proposed new professional league, Major League Soccer. Many within the USSF, particularly from the pro division, see this as a conflict of interest.

The pro vote, which delivered the election to Rothenberg in 1990, nearly cost him the presidency this time. The three voting blocks–professional, amateur and youth–split among the candidates. Only one of the four pro leagues voted for Rothenberg. His strength came from the amateur division and Groff took most of the pro vote and some of the youth.

Havelange’s unprecedented attendance here has angered some delegates who resent FIFA’s interference in the election. Most voters remember FIFA’s support for Rothenberg’s election in 1990. FIFA’s role then consisted merely of a phone call to one presidential candidate, asking him to withdraw from the race.

FIFA’s role in this election has been far more open. At a banquet Friday night, Havelange spoke for several minutes and lavished praise on Rothenberg, mentioning him by name some 16 times. On an evening that was meant to celebrate the sport of soccer in the United States, Havelange’s nomination speech seemed out of place.

Earlier in the day, Havelange had summoned candidate Des Bordes to his hotel room. Speculation was that FIFA would request that Des Bordes, who had little chance to win, withdraw. Des Bordes would not reveal what was said but reiterated late Friday night that he was still in the race.

However, Des Bordes dropped out after the first ballot. Further fueling the FIFA-deal theory, apparently all of Des Bordes’ delegates went over to Rothenberg on the second ballot.

Groff, for all of his conciliatory talk after the vote, was clearly angry with the FIFA influence on the outcome.

“FIFA is very insensitive to the operation of individuals with their constituents in the United States Soccer Federation,” Groff said. “They didn’t need to push so hard. FIFA is so scared to death that if Alan is not in front of MLS, it won’t succeed.

“They took that one step further–if Alan is not president of the U.S. Soccer Federation, MLS won’t succeed. It was all totally inappropriate.”

The calls for transparency and reform within USSF are becoming more frequent and louder.