What can one person do to help bring about #ProRelForUSA? 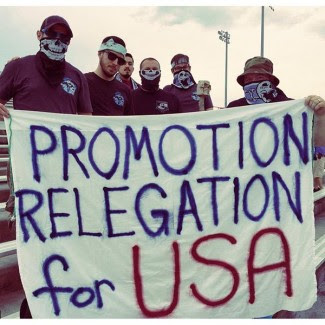 A pretty common refrain from people on Twitter about the #ProRelForUSA movement is that some individuals involved in the conversation are too confrontational or worse….

“Since the #ProRelForUSA crowd is already convinced that it speaks for the majority, turning off potential allies in this way carries little cost. That strategy, however, is based on an underlying delusion. Instead of building a coalition based on shared interests, leading promotion and relegation campaigners have decided to pick fights with potential allies. This is politicking at its most ineffective.”

While I disagree with much of what he wrote in the article… I actually have spoken about building bridges not burning them many times on my Twitter account and I’ve read many other do the exact same thing. While right now I won’t get in depth in to why I disagree with some of the major points he attempts to make (the main one is he conflates a few people on Twitter to the entire movement) I think it is important to address the Twitter discussion that was spurred on from this article.

1. There is no leader of the #ProRelForUSA movement 2. There are assholes on the Internet 3. If you don’t like the tone… SPEAK UP!!!!

4. The more discussion, persuasive writing, think pieces etc being written… the less the assholes stand out in the crowd

5. Share the “good people” of the movements thoughts 6. The block button is your friend

I saw many people agreeing with Mr. Rudin that they do not like the tactics of some of the most vocal Twitter supporters of the #ProRelForUSA movement. That is a perfectly acceptable response… most people don’t like assholes.

How do you as just one person help counteract this? If you really do care… SPEAK UP! If these few proponents of an Open Pyramid are just a few voices out of a 1,000 voices on social media they are just going to be a small piece of the overall movements noise. Use the hashtag religiously when you are talking about the subject.

I started this blog 100 posts ago… all because I felt like there wasn’t enough being written about the subject. If you would have told me during my English 101 course my Freshman year of college that I would be writing a blog that was read by 1,000 people a day I might have paid more attention…

That being said, if we allow 140 character tweets from a very vocal subset of #ProRelForUSA proponents to dominate the content being created on the subject that is our fault. Fire up the laptop and write a think piece, develop a plan, blog about an idea, make a meme… be a content creator.

If you see some content you do like… Share it to Reddit, Retweet it, put it on your Facebook wall, post it on your Instagram. Expand the reach of all of the “good people” advocating for #ProRelForUSA. Thank them for writing about the subject!!!! Don’t worry if you don’t agree with them 100% on every single item… if they want all clubs to have access to an Open Pyramid then we are all on the same team and can get all the particulars figured out later. We need the pressure ratcheted up NOW.

If you don’t like somebody or are being Trolled… use the “BLOCK” feature on your social media. Don’t expand their reach or waste your time by arguing with them.

Take a few minutes a couple of days a week and search out the people just joining the conversation and let them know you appreciate them speaking up. Introduce them to the #ProRelForUSA hashtag and ask them to continue to speak up. Let them know that every single person who speaks up is more pressure on the powers that be to open the pyramid up. Be a bridge builder and bring them to our side.

Take the movement to the stands… leagues all across the country are going to be playing games here in just a few more weeks. Make a banner, Tifo, 2 pole or even just some flyers and take them to your local clubs game and display them proudly. Take some pictures and post them online.

We as individuals can all help amplify the conversation online and in the stands. This is going to do nothing but increase pressure on the leadership of the USSF to actually do the right thing and do whats best for ALL the clubs in the United States, not just MLS. Wanting and wishing for Promotion and Relegation isn’t going to make it happen…. we must fight for it.